Wiltshire Storm to Under-14 Title 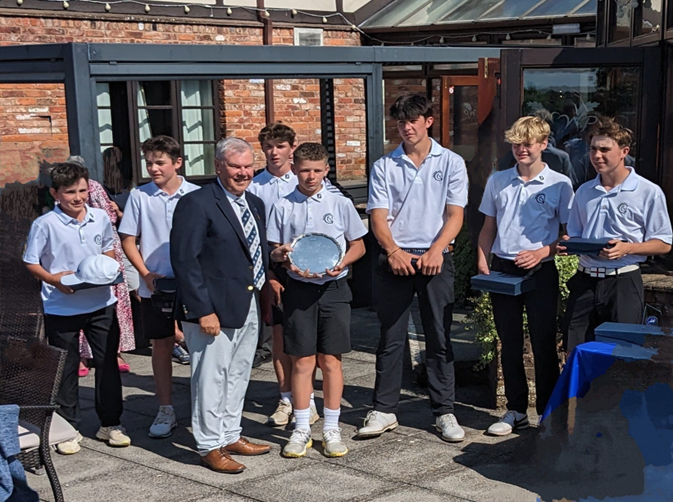 Wiltshire under 14s travelled to Devon for the final match of their Jack Roberts U14 League campaign, the match against Devon took place on Sunday 19th September at Downs Credition Golf Club. Damp overcast conditions greeted our arrival but thankfully the weather improved and allowed the match to start in glorious sunshine. The boys played a practice round the day before and got thoroughly soaked so it was a big relief to see the sun come out. Wiltshire had to make some changes to the side from the match against Somerset due to player unavailability, ever present team members Toby Clark, Ayden Knight and Wiltshire County Junior Champion Seth Barfoot were all unable to make the trip. We welcomed back into the side William Welsh, Lucas Butcher and making his first ever start for the tractor boys Sam Hathaway from Chippenham Golf Club. The team also included the ever dependable Wrag Barn Golf Club trio of James Biggs, James Tweed and Luka Drinkwater along with the Broome Manor Golf Club duo of Thomas Le Leivre and Jack Mawer.

The boys were under no illusion that it would be a tough match against a good and determined Devon side, so a fast start was crucial. The top order had to step up and get the ball rolling, the pressure was on William Welsh who had been promoted up the order to play at number 1. William grabbed the challenge with both hands, hitting a massive drive straight down the first fairway and played some great golf to win his match 3 and 2.  The next match involved one of our brightest prospects 11 year old Jack Mawer, Jack showed a maturity beyond his years to win his match 3 and 1. Next up was James Biggs, James opponent got off to a flyer holing putts from all over the place, this got James a little bit frustrated to say the least. However, James showed great determination and a run of birdies on the back nine proved too much for his opponent and James won 3 and 1.

The next three matches produced some of the best performances of the entire season, James Tweed had been struggling in the practice round so we did a bit of work on his swing and boy did it work. James played some absolutely superb golf and won his match by a score of 9 and 8. (I didn’t even charge him for the advice). James club mate Luka Drinkwater kept the momentum going, every time I watched Luka he was hitting great shots and setting up birdie opportunities, this great play proved far too much for his opponent and Luka won 7 and 6. Lucas Butcher continued to impress with some fine performances this season and this was another excellent display, Lucas swept aside his opponent winning his match 7 and 6. Match number 7 involved Tomas Le Leivre, Thomas had been ill overnight and it looked at one point like he may not be fit enough to play, but thankfully Thomas recovered and played brilliantly to win his match 3 and 2, a result which left his opponent feeling sick. The final game of the day saw Sam Hathaway making his first ever start for Wiltshire, Sam was brought in at short notice, if he was nervous on the first tee it didn’t show, Sam hit a tremendous drive and played great golf winning his match 3 and 2.

Sam’s score gave Wiltshire a clean sweep and a comprehensive win of 8 to nil, a result we affectionately call a “Tractor Wash”. What is all this about Tractors I hear you cry, our county junior boys’ squads all have the nick name “Tractor Boys” this is a reference to Wiltshire being a rural county (hope that explains things). Wiltshire has won the league with a perfect record of played 4 won four, three of the matches we won 8 to nil and the other one we won 7 and a half to a half.  I would like to say a massive thank you to all the excellent staff at Downs Crediton Golf Club for looking after us so fantastically well over the weekend. A big thank you to all the players, parents and officials from Devon, the match was played in a fantastic spirit. A huge thank you to the Wiltshire parents for their help and support over the weekend and throughout the season. The biggest thanks must go to the Wiltshire U14 players who all played brilliant golf and conducted themselves superbly both on and off the golf course, you were a credit to the county, your parents and yourselves.